The year 2014 has seen the anniversary of the outbreak of the First World War. The ‘soldier poets’ of 1914-18, such as Wilfred Owen and Siegfried Sassoon, left us with unforgettably moving and powerful representations of life in the trenches. For most of them the war was to bring their lives and writing careers to a tragically premature end. 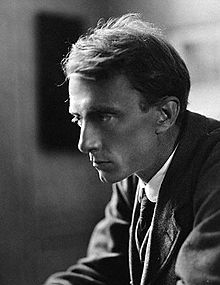 Not all the so-called ‘war poets’ wrote directly about the physical and emotional horrors of war.  One who adopted a more indirect approach was Edward Thomas (1878-1917), now regarded as one of the most ecologically-aware poets of the last century.

Many of his family were Welsh but Edward was born in south London, Thomas showed a passion for the English countryside from an early age. He eventually settled in Hampshire and got to know well the area around the South Downs.  Often suffering from bouts of depression, he earned a meagre living as a prose writer, and it was not until 1913, when he met the American poet Robert Frost, that he felt inspired and encouraged to develop his poetic talent.

Many readers will know Thomas’s short poem ‘Adlestrop’, which memorably records a moment of solitude when the train he was travelling in pulled up unexpectedly at a station by that name (it no longer exists). Atmospheric though that poem is, I think other poems show his deep connection with the natural world more persuasively. An example is ‘The Brook’, written in June 1915, just before he  enlisted in the infantry:

Seated once by a brook, watching a child

Chiefly that paddled, I was thus beguiled.

Mellow the blackbird sang and sharp the thrush

Not far off in the oak and hazel brush,

From mugwort dull. And down upon the dome

Of the stone the cart-horse kicks against so oft

A butterfly alighted. From aloft

He took the heat of the sun, and from below.

On the hot stone he perched contented so,

As if never a cart would pass again

That way; as if I were the last of men

And he the first of insects to have earth

And sun together and to know their worth.

I was divided between him and the gleam,

The motion, and the voices, of the stream,

The waters running frizzled over gravel,

That never vanish and for ever travel.

A grey flycatcher silent on a fence

And I sat as if we had been there since

The horseman and the horse lying beneath

The fir-tree-covered barrow on the heath,

The horseman and the horse with silver shoes,

Galloped the downs last. All that I could lose

I lost. And then the child’s voice raised the dead.

‘No one’s been here before’ was what she said

And what I felt, yet never should have found

A word for, while I gathered sight and sound.

The child mentioned in the poem is known to be the poet’s younger daughter, and the ‘fir-tree-covered barrow’ may refer to a Bronze Age tumulus on Brading Down in Hampshire. The language and style place the poem in an era now remote from our own, yet the subject is one we can relate to as current observers and custodians of the natural world.

The poem captures a heightened awareness of the earth’s time and of the connection between the human and natural worlds through the ages.  Thomas’s intense awareness of the sounds and creatures near him as he sits by the brook binds him in that moment to all living things and all periods of history, to the rotation of the old and the new, the ‘first’ and the ‘last’. Only when he is eventually called back from his ‘gathering’ of ‘sight and sound’ by the child’s voice, however, can he ‘find a word for’ or actually express what he has experienced, a vital step in recording its significance for the next generation.

Thomas considered himself to be an ‘inhabitant of earth’, not a writer concerned only with his local area. His ‘nature’ poetry, sometimes tinged with sense of foreboding, has an ecological dimension, made particularly urgent in a time of war.

Edward Thomas was killed in the Battle of Arras, on Easter Monday 1917.

This website uses cookies to improve your experience while you navigate through the website. Out of these, the cookies that are categorized as necessary are stored on your browser as they are essential for the working of basic functionalities of the website. We also use third-party cookies that help us analyze and understand how you use this website. These cookies will be stored in your browser only with your consent. You also have the option to opt-out of these cookies. But opting out of some of these cookies may affect your browsing experience.
Necessary Always Enabled
Necessary cookies are absolutely essential for the website to function properly. This category only includes cookies that ensures basic functionalities and security features of the website. These cookies do not store any personal information.
Non-necessary
Any cookies that may not be particularly necessary for the website to function and is used specifically to collect user personal data via analytics, ads, other embedded contents are termed as non-necessary cookies. It is mandatory to procure user consent prior to running these cookies on your website.
SAVE & ACCEPT